Ministry of Law has issued notification for the appointment of Justice Umar Ata Bandial as Chief Justice of Pakistan (CJP). 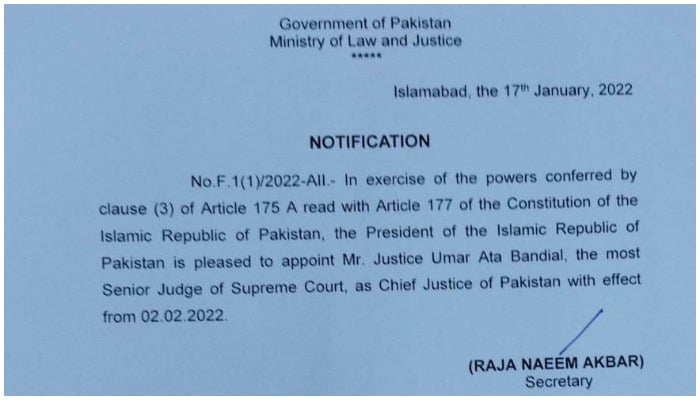 According to the notification, Justice Umar Ata Bandial is the most senior judge of the Pakistan Supreme Court. The ministry has issued notification after the approval of President Arif Alvi.

Justice Bandial will take oath as the new CJP on February 2, 2022, succeeding the current CJP Chief Justice Gulzar Ahmed after his retirement on February 1.

The appointment of Justice Umar Atta Bandial will be effective from February 2, 2022.

Earlier, President Dr. Arif Alvi had appointed Justice Umar Atta Bandial as the Chief Justice of Pakistan. The President made the appointment under article 175 of the constitution.

Government needs to be made aware of flaws in laws: CJP Bandial

Aug 15, 2022
Two labourers were electrocuted while working in a house in Manghopir area of Karachi. According to details, one…